If you went to The SmokeOut IV in 2003 you no doubt saw a maniac on a rigid Sportster riding around the fairgrounds shooting flames ten feet out of the back of his drag pipes. That was my buddy Kik. Him and I have been buds for about 15 years. He didn't know which end of a screwdriver to hold when I first met him, but he definitely had a passion for choppers.

I had this old 72 Sporty basket that I had bought off a crackhead for $300 in my basement at the time. He fell in love with that bike. The motor was toast but I had picked up a hotrodded Sporty motor cheap and installed it, made some pipes for it, some custom fender mounting, rebuilt the girder and brakes, etc... and got it running pretty good. In the mean time, Kik had bought him a little BSA basketcase and me and a wild dude named Charlie kinda helped him thru the rebuild and customisation of that scooter.

By 1992 I was ready to get out of construction, and was planning to go to MMI. I needed some cash for the move to Florida so I sold the Sporty to Kik, in bare metal, but running, and he finished the bike off by himself while I was in Florida. I had dragged him, kicking and screaming to the point where he had become fairly proficient at motorcycle mechanics by this time.

Well, many adventures, and more bikes later, the Sporty had sat for about 5 years with a bad smoking problem. After many trials and tribulations we finally figured out what ailed the poor Sporty, we fixed it and it was up and running once again.

We had tossed around many outrageous ideas while covered in oil, metal shavings and bondo dust, staring at our bare skeleton bikes.  Since both of us were total pyromaniacs, we had already discussed the feasability of a flamethrowing system many times. Kik, having more money than sense, and a strong desire to make a total spectacle of himself, had set his mind on the flamethrower.

He bought a spark box off of the internet and he got a schematic diagram for a gasoline fueled flamethrower setup from the guy selling the spark boxes. Kik had the pipes bent up, these things are 1/8" thick, he made the mounting brackets and ironcross pipe flappers himself. He had Eddie at MDO Modern Cycles weld up the bungs and mounts. Once they were chromed, Kik bought a shitload of nitrous oxide jet nozzles, jets, fittings, braided line, a 90 psi fuel pump, a nitrous oxide solenoid, a few relays, a coil, plug wires, some wires and a pile of connectors and then he and I dove into the schematics and tweaked them to the point where they would be reliable and safe.

We plumbed the fuel bungs, ran lines to the pump, ran a Tee fitting from the gas tank to the pump, we stuffed the pump, nitrous solenoid, two relays and all the wiring into a old time H-D toolbox. Then we installed spark plugs in the bungs, wired them to the coil and the spark box and ran wiring to the handlebar switches. None of this was as easy as it sounds here. After a few false starts and some troubleshooting we got the thing to shoot fire.

SON-OF-A-BITCH!!!! We should have opened the garage door first! After burning up a few coils and spark boxes, melting his seat, catching his hair on fire and generally scaring the living shit out of a large segment of the population of Montgomery County, we had a reliable system that would work 95% of the time. Since then I have installed an even better system on my Shovelhead thats been 100% reliable for over a year now. I've gotten 15 foot flames out of this new system and have plans for modifications to make it even more spectacular. I built my entire system myself, including the welding. These pictures only document what we did. I HAVE to say this:

Now thats out of the way, enjoy!

I used to have a hand drawn wiring and plumbing diagram for the gasoline injected flamethrower here, but a lawyer friend of mine has informed me that by making this info available to just anyone (including minors) could expose me to litigation if some retard screwed up and caught his ass (or something else) on fire. To protect myself, I have decided to still make the schematics available, but now I will require a signed release form and a small fee payable by Paypal. I am now charging money for these drawings for a few reasons. First reason is that to have a Paypal account you need to have a credit card and for that you need to be over 18. That weeds out the minors. Second reason is that I spent a lot of money trying things that didn't work , or didn't work well, before I finally hit upon the right combination of components and wiring that would make the system reliable. My knowledge and experience can save you money in the long run because you won't be making all the same expensive mistakes that I made. My plan package includes a wiring diagram, a plumbing diagram, a parts list and some parts sources, as well as general instructions and a troubleshooting section. To order a set, go to my Merchandise Page where I have shirts and the Flamethrower Plans Package for sale. 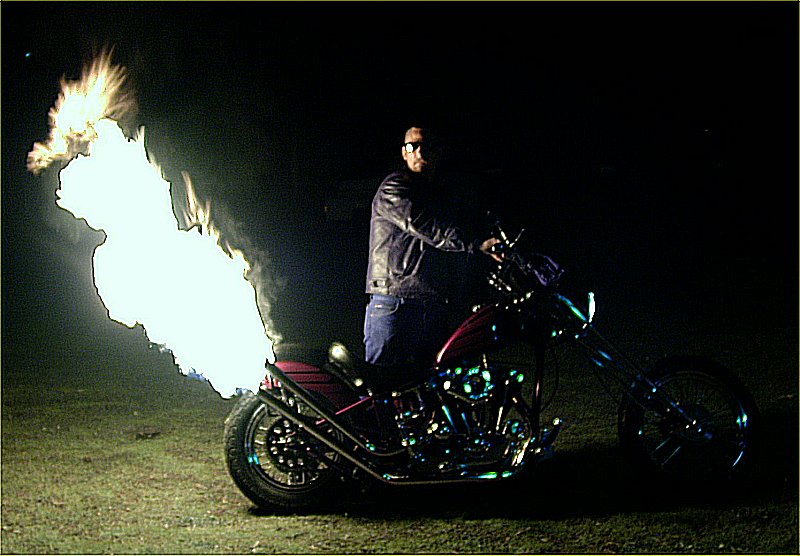 BACK TO HELL ON WHEELS.COM

All text, diagrams and photographs on this page are copyrighted by Hell On Wheelz, Inc. No reproduction will be allowed without prior consent. If you would like to use any of this information, contact me at spinninwheelz@yahoo.com